Yes, I missed writing to all of you over the weekend. However, while I apologize, I’m not sorry. I spent much of it writing, as in writing notes and dialogue for a new book. The thing is, I now have three books in development, and I don’t know which one will make it to the publishers first. The first one is ‘Lucky Bitch,’ book 3 in the Mona Bendarova Adventures (MBA). Except for a couple of plot updates, and a definite timeline problem, I’ve almost finished rewriting the second draft of the book. The problem with this one is, I haven’t touched in a few months, as I wanted to finish up ‘The Trafficking Consortium’ (TC). That’s done now, and sales are exploding, so it’s time to move on.

The second book in development is a serial murder who-done-it mystery. I have written a rough outline, defined the characters, and written a few chapters. Well more like scenes and they are very rough. I had the idea during the final stages of TC, and I started writing notes for it over the past several months. I like the idea of completing the story, but I can’t do them all at once. 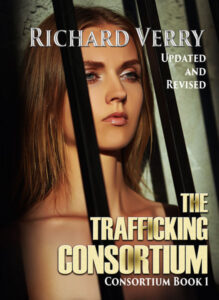 The third book is more of a jotting down notes, writing some scenes, and fleshing out the story line. I had not planned on writing this one, but my readers and followers are all asking for a follow-up to ‘The Trafficking Consortium.’ I did end the story with a bit of a hook in case I decided to write a sequel. I’ve got some ideas on how to take Avril’s story. Input from my fan base and readers of the story are welcome to throw me ideas. If you would like to contribute, send me your comments, and I’ll take them into account.

So, as it happened, for more than ten hours on Saturday, I wrote and wrote. Sunday I added a bit more, but nothing like Sat. My girlfriend wasn’t overly happy with spending the bulk of the day with my laptop in front of me. I did try though. I took the laptop with me to the porch, sitting alongside her while I wrote. She still complained to me later in the day and again on Sunday. What’s a guy gotta do? She wants me to write, get better at my craft, and earn what it will take to buy that house on the beach in the tropics. It’s a never-ending battle.

Maybe it’ll stop after I buy that beach house. I’m crossing my fingers.

Have a great day and a better tomorrow.

This site uses Akismet to reduce spam. Learn how your comment data is processed.

“Nothing is impossible;
Everything is possible;
It’s all in the attitude.”
~ Richard Verry

“I don’t care if a reader hates one of my stories, just as long as they finish the book.”
~ Roald Dahl